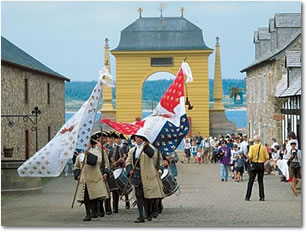 AS WE ENTERED the impressive Dauphin Gate at the Fortress of Louisbourg National Historic Site on Nova Scotia’s Cape Breton Island, the guards abruptly stopped us, suspecting we were spies.

Eyeing us suspiciously, they demanded that we tell them who the king of France was—in 1744! After finally convincing them we weren’t enemies of France, we were allowed to enter—and proceeded to enjoy one of the best living-history attractions we’ve ever seen.

Our detainment at the gate was only one small example of the realistic atmosphere re-enactors inject into this massive complex of homes and military facilities. As the largest reconstructed fortress/village in North America, it’s easy to see why it’s considered one of the crown jewels of Canada’s historic sites.

Established in 1713 by French settlers, Louisbourg was a key military stronghold and trading center on Nova Scotia’s northeast tip. In 1719, the French began building a fortress befitting its military importance.

But British troops captured Louisbourg in 1760 and destroyed the fortifications. By the 1800s, fewer than 100 people still lived in Louisbourg.

In the 1960s, the Canadian government began a monumental reconstruction project. And now, some 290 years after settlers first arrived here, the fortress has been partially restored to its former glory.

At nearly 15,000 acres, the site is huge, so we recommend wearing comfortable walking shoes when you visit. Picnic facilities are available, so pack a lunch and prepare to spend a day here… there’s plenty to do and see!

We wandered around the streets, checking out the various buildings and talking with re-enactors in period costumes. There are more than 100 reenactors depicting everything from soldiers, merchants and street vendors to bakers, fishermen and residents.

Being an avid needleworker, I was fascinated by the demonstration of bobbin lace-making by Madame DeGannes, a military captain’s wife. And her hired help showed us how they cook over an open hearth.

Maybe you’ll have the pleasure of meeting Claude Verrier, the king’s engineer, who’ll explain the town’s layout and how the fortifications were built. 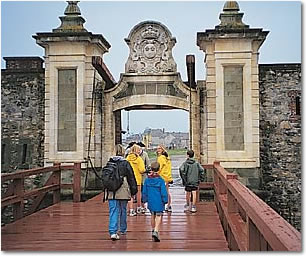 The King’s Bakery is a fun place to stop. From June through September, the bakery provides bread for the soldiers stationed here. Don’t miss the impressive King’s Bastion; surrounded by an inner wall, this fort within a fortress includes the largest building in the complex, the soldiers’ barracks. You’ll likely bump into a soldier who’ll tell you what life was like here in the 1740s.

While you’re there, be sure to stop at the beautiful Chapelle St. Louis, the garrison chapel. Its magnificent trappings offer a stark contrast to the common soldiers’ quarters!

For lunch, we ate at the Hotel de la Marine, which catered to the working class. The bread was a little coarse, but the simple meal of soup, tourtiere and vegetables was very tasty. Be advised, though, that you’ll only get a spoon to eat with; if you want a full set of cutlery, go around the corner to the L’Epee Royale, where the upper class eats!

We also took time for the ruins walk, where you can look at other buildings in the complex that weren’t restored. Here you’ll get a lovely view across the harbor of the town of Louisbourg and its lighthouse.

All in all, our visit to the Fortress of Louisbourg was a day well spent. Just remember that Louis XV was the king of France in 1744!

Before You Visit…Louisbourg is on Cape Breton Island, about 25 miles south of Sydney on Highway 22. The fortress is about 1 mile west of town; visitors buy tickets at a reception center in Louisbourg and take a bus to the fortress.

The fortress is open year-round, but re-enactors are present only from June through September.

In May and October, the fortress buildings are closed, but guided tours are available.

From November through April, free walking tours are available only by appointment. For details, call 1-902-733-2280 or log on to www.pc.gc.ca/en/lhn-nhs/ns/louisbourg/index.

Interested in camping nearby? Check out KOA campground locations in Nova Scotia.