For Frank Lloyd Wright, there literally was no place like home-his beloved Taliesin. 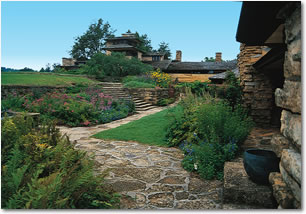 Even if you know nothing about Frank Lloyd Wright, you’ll enjoy touring Taliesin, his fascinating home that’s often been described as his autobiography in wood and stone.

For nearly 50 years, Wright lived and worked in Taliesin, which overlooks the picturesque southwest Wisconsin valley where his ancestors settled. The sprawling 37,000-square-foot, 50-room masterpiece includes many of Wright’s trademarks, particularly the harmonious fusion of building and landscape.

The 2-hour tour is both interesting and surprising. For instance, you’ll learn that Taliesin is a Welch word for “shining brow,” which reflects Wright’s belief that buildings should sit on the brow of a hill, never on top of it.

You’ll also find yourself bemused that this internationally known architect made use of even the most mundane items-witness the arbor he cleverly fashioned from cow stanchions.

And did you know that Wright loved plywood? You might assume that Taliesin would gleam with fine hardwoods, but he liked plywood because it was versatile and inexpensive.

Because Taliesin also served as a home and hands-on architectural school for a community of apprentices, it was a constantly evolving work in progress. That offered another good reason to use plywood!

The guides here are excellent. They offer an enthusiastic and reverent narrative filled with insightful Wright anecdotes. One story recounts how Wright, who possessed a staggering collection of Oriental artwork and furnishings, cut an immense and extremely rare Oriental rug down to size when it didn’t fit in the room for which he bought it!

Another story is about the time Wright received a surprise call from a client who announced he was in Milwaukee and wanted to see the drawings for a home he’d commissioned Wright to design months and months earlier-the famous Fallingwater in Pennsylvania. Although not a single line had been drawn, a nonplussed Wright said, “We’re ready for you.”

He then hung up, turned to his panicked assistants and said,

“Gentlemen, sharpen your pencils.” And about 3 hours later, Wright greeted the wealthy Pittsburgh businessman with not only floorplans, but an eloquent and passionate description of the house’s every facet. The home, which straddles a waterfall, became one of Wright’s most famous designs-and it followed the plans to a tee.

When staffers later expressed astonishment, Wright tapped his head and said, “It was up here the whole time.”

After viewing this prodigiously talented man’s simple genius firsthand, you’ll be just as impressed as his assistants.

Taliesin is just southwest of Spring Green, located about 35 miles west of Madison, near the junction of State Highways 60 and 23. Tours, which include more buildings on the 600-acre estate, are available. Tour times vary, so check out Taliesin Preservation online at www.taliesinpreservation.org before visiting.

Interested in camping nearby? Check out KOA campgrounds in Wisconsin.