You don’t have to be a rock hound to “dig” the Paul Broste Rock Museum in tiny Parshall, North Dakota. 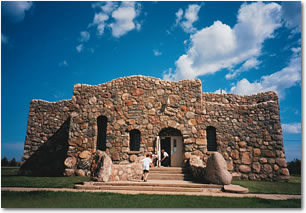 As you stroll through the museum, you’ll become totally fascinated with its amazing rock collection inside-nearly 700 in all. Many of the rocks came from the surrounding area, but others originated in countries all over the world.

One in particular-a large fluorite crystal-is considered priceless. Many of the rocks are so rare they’re only found at larger, more famous museums.

Paul Broste, a local farmer, began collecting the rocks during the 1920s. He cut, ground and polished the rocks, hoping one day to house them in a museum.

With help from the community, he constructed a building using native granite (shown here) and opened the museum in 1966. Paul called it his “Acropolis on a Hill.”

Interested in camping nearby? Check out KOA campgrounds in North Dakota.