Peer 26,000 years into the past at a remarkable Ice Age treasure trove in Hot Springs, South Dakota. 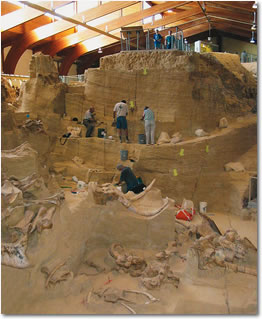 You’ll be awestruck the second you walk into the fascinating Mammoth Site of Hot Springs, South Dakota.

A building here covers a 120-by-160 foot sinkhole that started to collapse 26,000 years ago. In the ensuing centuries, this geological snare trapped mammoths and other animals that were lured by warm springs and succulent plants.

Once trapped, the animals settled to the pit’s bottom to await their meeting with paleontologists centuries later in 1974, when earth-moving equipment uncovered their remains.

What’s unique about this remarkable museum is its sense of intimacy. Boardwalks and stairways take you up and down various levels of the pit, and mammoth tusks, skulls and rib cages pop out all over.

You’ll find yourself nearly nose to nose with these ancient relics, and you can watch excavators patiently work with brushes and sifters.

During a 30-minute guided tour, you’ll learn that workers have excavated only an estimated one-third of the sinkhole. Thus far, they’ve discovered 52 mammoths-49 Columbian and 3 woolly mammoths.

There’s also a great museum here that includes a life-size replica of a mammoth. It’s hard to imagine that herds of these creatures roamed the earth up to 55 million years ago. Roughly 14 feet high at the shoulder and weighing 8 to 10 tons, mammoths ate about 700 pounds of vegetation a day, chewing their food with molars as big as shoeboxes!

At the museum, you can also see a mammoth bone shelter, a replica of the structures fashioned out of mammoth bones by ancient people in the Ukraine, Poland and Czechoslovakia 12,000 to 19,000 years ago.

Make no bones about it, this is one fascinating place to visit.

Hot Springs is at the junction of U.S. Highways 18 and 385 in southwest South Dakota, just south of Custer State Park.

Interested in camping nearby? Check out KOA campgrounds in South Dakota.