by Jeff B., Bloomfield, New Jersey 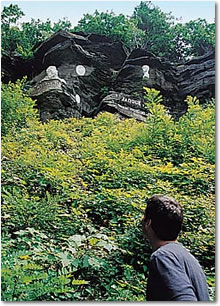 WHENEVER we travel near the Catskill Mountains in New York, we like to visit Pratt Rocks, a little-known collection of mountainside carvings just east of Prattsville.

Mount Rushmore may be grander, but the Pratt Rocks relief carvings are older, some dating to the 1840s when local tannery owner and politician Zadock Pratt commissioned carvings to commemorate his numerous achievements.

But when his son, George, died in the Civil War, the project became a touching tribute to his son. Busts of father and son gaze at each other amid a family coat of arms (at right), inspirational messages, an arm raising a hammer and other carvings.

The family farm is now a town park, where we like to picnic along the Schoharie Creek. The 500-foot climb up to the cliff is steep, but workers carved stone benches and chairs along the way. And the view from the top is absolutely breathtaking.

Prattsville is in southeastern New York, about halfway between I-87 and I-88 on State Highway 23, roughly 66 miles southwest of Albany. Pratt Rocks Park is on the eastern edge of town.

Interested in camping nearby? Check out KOA campground locations in New York.