Re-enactment in Virginia sheds new light on the Civil War. 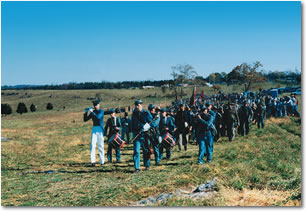 For revealing insights into the Civil War, take a trip to Middletown in northern Virginia some October and watch a re-enactment of the little-known Battle of Cedar Creek.

As you drive through Middletown, you’ll see Confederate and Union flags lining the main road through town. The trail of flags leads to the site, where white canvas military tents dot the landscape as far as you can see. You might see a long column of uniformed troops, returning from an 8-mile march, file past and stand for review.

It’s fun to visit with the knowledgeable re-enactors in their camps, where women in period dress prepare Civil War-era recipes over open fires.

The military demonstrations are fascinating to watch. The artillery smoke and fire are most impressive. You can sit so close to the action that you can actually feel the ground shudder as horses and their riders come charging past.

But most spectacular of all is the narrated battle re-enactment, starting with the attack on sleeping Union soldiers. But you’ll learn that the hungry and poorly equipped Confederates paused to grab provisions, which gave Union troops time to regroup, rally and eventually win the battle, which occurred in 1864.

This colorful event is a must for any history buff.

The Cedar Creek and Belle Grove National Historic Park is a mile south of town. There are self-guided driving tours.

The Battle of Cedar Creek re-enactment is held on the weekend closest to its October 19 anniversary and is wheelchair accessible.

Interested in camping nearby? Check out KOA campgrounds in Virginia.