So much to do, you’ll want to plan to stay a while! 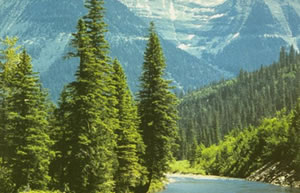 Scenic byways, majestic mountains, and pristine lakes await you in the Adirondack region of Northern New York. Adirondack Park is the largest forest preserve in the eastern United States. The Adirondacks were voted the second most popular travel destination in North America for 2005 by AllGetaways.com.

There are forty-six peaks over 4,000 feet and over 2,000 miles of marked trails. You can go hiking, canoeing, fishing or have a picnic near a waterfall. In a land of forests, mountains, and lakes there is something for everyone’s interests and abilities. From the high mountain peaks in the northeast to the flat woodlands of the St. Lawrence valley in the west, and the lakes and rivers in between, you will enjoy this spectacular park.

Visit High Falls Gorge where there is a scenic walk that gives you a view of the granite cliffs, a series of waterfalls, and many dark pools. There is much to discover in northern New York State, some of which the state of New York has declared “forever wild”.

There is much to discover in northern New York State, some of which the state of New York has declared “forever wild”. When you are done exploring, stay at the Lake Placid KOA, conveniently located near all the attractions.