By Dorothy A., Fayetteville, West Virginia 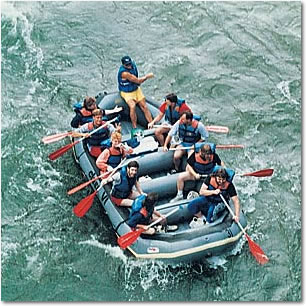 FOR some of the most breathtaking views in the East, you can’t beat the New River Gorge in the heart of southern West Virginia.

The New River—actually one of the oldest rivers in the world—flows north from North Carolina. Over the eons, it has carved its way through the Appalachian Mountains, creating a gorge so deep and majestic, it’s often called the “Grand Canyon of the East”.

The 23-year-old New River Gorge Bridge on U.S. Highway 19, just north of Fayetteville, is almost as impressive as the gorge it spans. The slightly more than half-mile-long bridge is the longest single-arch span in the world. And towering 876 feet above the river, it’s the second-highest bridge in the U.S. (only Colorado’s Royal Gorge Bridge is higher).

Each year on the third Saturday in October, the bridge is closed so people can walk across it while the gorge is ablaze with fall color. Vendors set up booths at each end and sell food, crafts and wares.

One highlight of “Bridge Day” is watching thrill-seekers parachute from the bridge to a tiny sandbar on the river below. Only the most skilled divers land on the sandbar. The rest splash into the drink, where they’re helped into boats. 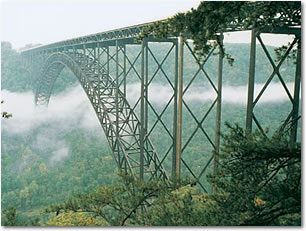 Even if you’re only passing through, be sure to stop at the Canyon Rim Visitors Center on the north end of the bridge. Here you’ll learn about the gorge’s history, the area’s coal and timber industries, recreational attractions and wildlife. Decks provide excellent views, and a short boardwalk into the forest puts you right on the gorge’s rim.

Many of the hiking trails follow old railroad grades, so they’re relatively easy to walk. Keen-eyed hikers can spot many plant and animal species, along with remnants of isolated coal-mining towns that were accessible only by rail.

Whitewater rafting trips on the New River are very popular. They can last up to a full day, but include plenty of calm stretches that allow you to relax and enjoy the ride.

Whether you visit for several days or just a few hours, you’re sure to be awed by the beauty of the New River Gorge and the engineering marvel above it.

Before You Visit…Fayetteville is about 70 miles southeast of Charleston on U.S. Route 19. The New River Gorge National River area, which includes 53 miles of the New River, is open year-round. The Canyon Rim Visitors Center is also open year-round, except for Thanksgiving, Christmas and New Year’s Days.