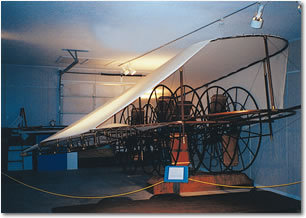 In 1902, one year before Wilbur and Orville Wright made history at Kitty Hawk, North Carolina, an airship built by Baptist minister and inventor Burrell Cannon took flight in Pittsburg, Texas.

Today, you can see a full-scale replica of Reverend Cannon’s unusual Wheel-Within-A-Wheel Airship in the Cotton Belt Depot Museum, part of the Northeast Texas Rural Heritage Center and Museum in Pittsburg in East Texas.

Inspired by the prophet Ezekiel’s Biblical account of flying machines propelled by wheels, Cannon spent 20 years designing plans and praying for divine inspiration. He finally built an aircraft with fabric-covered wings, powered by an engine that turned four sets of paddles mounted on wheels.

Spectators allege that the machine first flew in a pasture outside Pittsburg. After that, Cannon shipped his invention to the 1904 World’s Fair in St. Louis. But in Texarkana, Texas, a storm blew the airship off its flatbed railroad car, destroying it.

Cannon built a second airship in Illinois in 1913, but it hit a utility pole on its maiden flight. He then abandoned his flying pursuits.

But you can relive Cannon’s dream in Pittsburg, located where U.S. Highway 271 meets State Highway 11, about 12 miles south of I-30 and roughly 70 miles southwest of Texarkana. The museum is wheelchair accessible.

Interested in camping nearby? Check out KOA campgrounds in Texas.