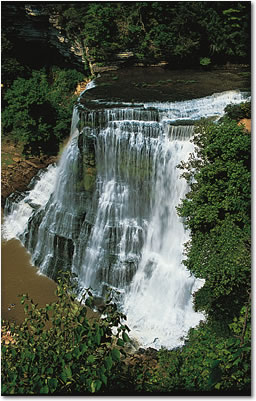 Burgess Falls State Park is one of the most beautiful natural wonders in all of Tennessee.

Located on the eastern edge of the state’s Highland Rim between Nashville and Knoxville, the park features three dramatic waterfalls along the Falling Water River. The first, appropriately known as First Falls, can be seen-and heard-from the park’s parking lot and picnic area.

This waterfall spills rapidly over layers of rocks and green reeds, and is especially beautiful in autumn. From here, a hiking path lined with wildflowers and mushrooms takes you to Middle Falls, which looks like a large, lacy bridal veil.

For the grand finale, the path leads to an overlook platform at Big Falls, also called Burgess Falls, the largest of the three. These thundering falls are 130 feet tall, and the view is breathtaking.

You can also take a path that leads under the falls. It’s wonderful to stand here and feel the cool spray on your face.

The primary trail past the three waterfalls, known as the river trail, is about 3/4 of a mile long. It’s moderately rugged and is open only to foot traffic.

Burgess Falls is named after Tom Burgess, who was deeded the land here in 1793 by the U.S. government for his services in the Revolutionary War. It abuts the Cumberland Plateau, so the area is filled with high bluffs, ridges and woodlands.

Burgess Falls State Park, (4000 Burgess Falls Dr.) is about 90 miles east of Nashville in central Tennessee. Take Exit 286 off I-40 at Cookeville and follow State Highway 135 south for 7 miles to the park. Check their website at https://www.tn.gov/twra/wildlife/viewing-area/east-tennessee/burgess-falls-sna.html for current times and admission rates.

More to See… Built in 1909 by the Tennessee Central Railroad, the Cookeville Depot Museum, (116 W. Broad St.) in Cookeville, 7 miles north of the park, is a must-see for railroad buffs. Check their website at www.cookevilledepot.com for current times and admission rates.

Interested in camping nearby? Check out KOA campgrounds in Tennessee.