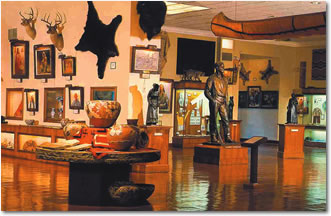 Near Bartlesville, Oklahoma stands Woolaroc, a novel reflection of one man’s fascination with the untamed Old West.

Frank Phillips, founder of Phillips Petroleum, established Woolaroc in 1929. A colorful and adventurous sort (he was the only white man to be named an honorary chief of the Osage Indian Nation), Phillips witnessed the last years of the Old West and was determined to preserve its romance and spirit.

Phillips created the name “Woolaroc” by combining the main components of the grounds: “woods,” “lakes” and “rocks.” On the grounds, you’ll find a wildlife preserve complete with buffalo, white elk and longhorn cattle.

There’s also a museum filled with artwork by famous Western artists and other memorabilia, ranging from shrunken heads to the famous Woolaroc plane that won a race from California to the Hawaiian Islands in 1927…the rustic country lodge that served as Phillips’ home…a Native American Heritage Center…and more.

As you drive through the grounds, you may have to stop for a herd of buffalo blocking the road. It sure is exciting to see them up close!

You could easily spend half a day at Woolaroc, which is 45 miles north of Tulsa on State Highway 123. When you’re finished, consider heading for downtown Bartlesville, 12 miles to the northeast, and visiting the Phillips mansion.

Interested in camping nearby? Check out KOA campgrounds in Oklahoma.