Red sandstone formations and ancient petroglyphs give this state park a mysterious allure. 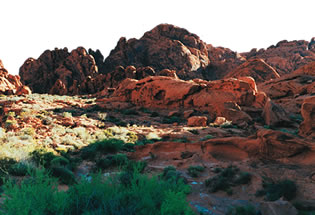 Near Las Vegas is a natural wonder that shines as brightly as neon casino lights: Valley of Fire State Park, Nevada’s oldest and largest state park.

Located in the Mojave Desert, this 34,880-acre park was named for its brilliant red sandstone formations. When the sun reflects off them, they sometimes look like they’re on fire-an effect that’s both awesome and eerie.

This area was once a deep ocean basin that eventually dried up and became a vast desert some 150 million years ago. Over millions of years, the desert’s immense sand dunes were buried, hardened and then exposed by shifts in the earth’s crust. Erosion then created the amazing formations you see today.

You can learn more about the area’s history at the park’s Visitor Center. And the nearby Lost City Museum is filled with artifacts from the Anasazi, a group of people that lived here before mysteriously disappearing around 1150 AD. The museum is built on the ruins of an Anasazi pueblo, and features a replica of the pueblo.

The Anasazi left many petroglyphs, or drawings etched in rock. You can see some fine examples by climbing the iron staircase to the top of Atlatl Rock, one of the park’s many distinctive formations. More petroglyphs are visible on a 1/2-mile walking trail through Petroglyph Canyon.

There are two auto routes through the park. A brief 2-mile Scenic Loop Road takes you past some of the valley’s most interesting formations. The 30-mile Bitter Springs route provides a more expansive look at the park’s marvelous landscape.

In the summer, temperatures here usually exceed 100°, so spring and fall are the best times to visit. It’s a quiet, relaxing place-and never crowded. It’s definitely worth seeing!

Valley of Fire is roughly 55 miles northeast of Las Vegas. From Las Vegas, take I-15 for about 35 miles to Exit 75, then head east on State Highway 169 for about 15 miles to the park entrance.

Interested in camping nearby? Check out KOA campgrounds in Nevada.