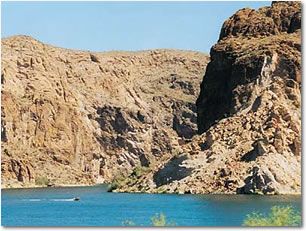 THE NEXT TIME you’re in Phoenix, Arizona, consider a day trip through history along the Apache Trail, also known as State Highway 88.

The trail used to be a raiding route for the Apache Indians as well as a stagecoach and freight wagon route between Mesa and Globe. Now it’s a narrow, windy road—some of it unpaved—that runs through some of Arizona’s most scenic areas, including the Tonto National Forest and the legendary Superstition Mountains.

The mountains are supposedly the home of the fabled Lost Dutchman gold mine. Many a soul has roamed these mountain canyons looking for the mine, which supposedly holds a fortune in gold.

My wife, Bev, and I found out about the Apache Trail while trying to get to Tortilla Flat, a place I’d heard stories about and wanted to visit. Turns out the best way to get there is via the 80-mile-long Apache Trail.

The route winds, twists and turns as it climbs through primitive stretches of rugged desert mountains. About 23 miles of it, from east of Tortilla Flat to Roosevelt, is a gravel road narrow enough to make it unfit for larger RVs, so be careful.

Along the way, you’ll see rugged canyons and cliffs, not to mention four beautiful blue lakes created by dams along the Salt River. It seems strange to drive through desert landscape dotted with saguaro cacti and then suddenly come upon these pristine lakes. What a contrast! 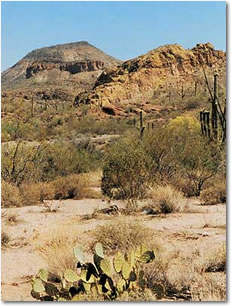 At Canyon Lake, don’t miss a nature cruise on the Dolly, a steamboat replica. It travels through deep canyons full of caves and strange rock formations. Canyon Lake tours have been offered here since 1925.

At Theodore Roosevelt Lake, the Roosevelt Dam is worth a stop. When it was dedicated in 1911 by President Theodore Roosevelt, the 280-foot-high dam was the world’s largest masonry-built dam. (You can’t see the masonry work anymore; the dam was reclad in concrete in 1996 and now stands 357 feet tall.)

Just northeast of Apache Junction is another highlight: the Goldfield Ghost Town, a re-creation of Goldfield, a mining boomtown founded in the 1890s. Here you can see a reconstructed portion of the Mammoth Mine, which produced $3 million in gold bullion between 1892 and 1896, along with a saloon general store, a museum, a train ride and a host of shops.

But the highlight of our trek was famous Tortilla Flat, about 20 miles northeast of Apache Junction. A popular stop for folks passing through the area, this former stagecoach stop is now home to only six residents. A big draw here is the Superstition Saloon, noted for its cowboy burgers and killer chili and the real horse saddles that serve as bar stools.

I didn’t try any of the chili. But from what I could gather, a bucket of cold water and a fire extinguisher could come in handy!

One unusual thing: The restaurant walls are covered with thousands of dollar bills, as well as currency from more than 60 countries. It’s become a tradition for patrons to write their name on a dollar bill and stick it on the wall. Actually, it’s too dangerous to do it yourself now, so someone from the restaurant gets a ladder and does it for you!

There are two stories about how this tradition started. One has it that during stagecoach stops, folks would take supplies and nail their payment to the wall if no one was minding the store. The other alleges that two cowboys had a bet going, but since they didn’t trust each other, they each wrote their name on a dollar bill and had the bartender nail the bills to the wall.

No matter how it started, it sure is a sight to see—just like the rest of the stops along this historic trail!

Interested in camping nearby? Check out KOA campground locations in Arizona.