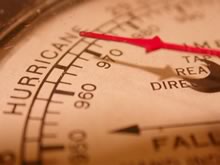 A hurricane is a type of tropical cyclone – an organized rotating weather system that develops in the tropics. Hurricanes rotate counterclockwise in the Northern Hemisphere. Tropical cyclones are classified as follows:

What to listen for:

If you are asked to leave an area due to an imminent Hurricane or Tropical Storm: