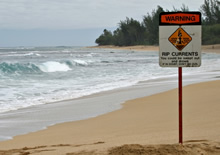 Learn to swim! When at the beach:

If caught in a rip current: